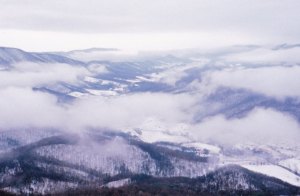 I’ve seen clouds hanging low in the mountains, caught by trees on the slopes, resting in the valleys.  You touch what eyes see when you walk through them; cool, white mist, carrying the scent of pine.  Earth mixed with sky.

Sometimes, though, low clouds are dark, oppressive, thick with storm.  Sadness can be like that.

Living through the deaths of four people within my circle in nine months took a toll on me. Mixed in with other challenges and discouragements,  I felt overwhelmed.  There were times I went for a run, needing peace and coming back, instead, with a heavy heart, tears on my face, missing my mom.  In a way, that was a release, but not the one I sought.

The grief that I’d taught lessons on before was real to me in a new, deep and complex way.  The loss of my mom, mother-in-law, a friend and the tragic death of a young woman who used to  come to my Bible classes, felt like a dense, dark  cloud, pressing against me. 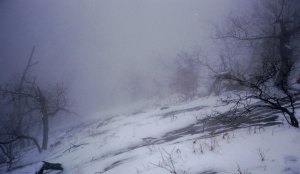 I grieved for myself, my children and husband, other family members and people hurt by these losses; all confusingly caught up in the context of knowing God is fully in control and that the spirits of those I loved were with Him.

I felt frustrated with  myself for feeling such sadness when I knew I should be able to embrace the joy that’s wrapped up in eternity and knowing earthly trials are temporary. Yet, the grief and loss were pervasive.

I’ve struggled with so many emotions and thoughts these last months.  I’ve prayed that God would lift the clouds and return the sunlight.  I cried out to Him in frustration with the sadness I couldn’t shake on an early morning run, two months ago.  It wasn’t the first time; but it was  His time for an answer.

He brought to my mind Ecclesiastes, chapter three.  I’ve included those verses in lessons before, and spoken about the seasons of life, but God’s words became real to me in a new and active way.

“There is a time for everything and a season for every activity under heaven:”

As I ran through the humidity, present even before the sun was high, God opened my eyes to see that the heat of summer remains until He brings the crispness of Fall.  No amount of wishing for the cool, clean air of autumn will bring it before its time.  There is nothing anyone can do to change the seasons in the natural world around us.  In the same way, the seasons of life; “a time to weep and a  time to laugh, a time to mourn and a time to dance,” (Ecclesiastes 3:4) are all in His hand.

Before my feet came to a stop that morning, I had puzzled the whole thing through. It became real to me that God was in control of my season of grief, and that He would use it for His purposes.  I could rest in His hand if I didn’t strain to slip through His fingers.  His choice, so far, hadn’t been to lift me out of the sadness, but instead, to walk with me through it.  His promise was not to enable  my escape, but to teach me it was a season, not a forever, and that, in Him and His wisdom, I could find peace, despite  circumstance.

Block Island rests in the Atlantic, offshore Rhode Island.  Bluffs of clay and rock rise up from the ocean, rugged stretches that invite exploration.  Most of the  beaches there aren’t made of soft, white sand that feel like powder under your feet.  They are, instead, marked with boulders, rugged slopes and piles of rock. 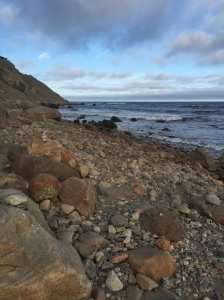 The rocks that  rest above the tides have jagged edges and irregular sides, but the ones that fall where the waves beat and jostle them about are rounded and smooth, elegantly beautiful, roughness worn away by storms and tides whose number only God knows.

The place where the shore meets the ocean whispers with music: rock and water, a symphony of refinement,  directed by the hand of the Creator.  It’s been said that I’m not able  to sit still for any length of time, but I could rest there all day and listen to the rocks tumbling together in the hands of the tide. 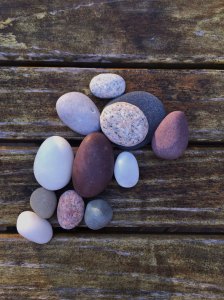 Grief is achingly real. Losing people you love is painful.  Watching people grieve and knowing their burden is heart breaking. But the greatness of God is real, too.  He allows seasons of sadness to come in our lives for purposes we cannot always understand. The seasons that are the hardest to walk through are often the ones that bring about the most elegance of spirit and the hauntingly beautiful music that proclaims His beauty.  The symphony happens when we  His speak His goodness,  see His Sovereignty, acknowledge His timing, and rest in His hand, trusting Him in and through it all.

6 thoughts on “EARTH AND SKY; OCEAN AND SHORE”