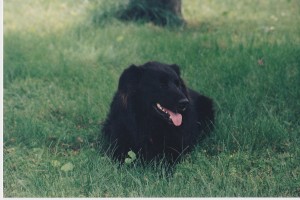 My sister often quipped that our family farm was the first no-kill animal shelter in Kentucky.  It’s true my daddy had a heart for helpless creatures.  He kept every stray that crossed his path. Once, on a cold and rainy fall day, a pink piglet ambled up to our porch.  My daddy fed him milk out of a hubcap.  We named him Arnold.  It was a mystery where he came from, but from that day on, he had a home.

Our Rescue Hall of Fame included a beagle-terrier mix with a crooked tail my dad and his nephew found in a junkyard when I was six.  I creatively called him Spot.  He quickly became my best buddy and partner in crime. There was also a dog-coyote mix daddy found in a trap.  He nursed it back to health and told stories about how fast his wild girl learned to run on three legs.

There were many others, but my favorite story is the one of the black dog. When my dad was in his late seventies, he would walk to visit his friends who lived about a mile from our home.  His route took him past a trailer.  In the yard of that trailer was a light pole.  Attached to the pole was a chain.  The end of the chain was wrapped around the neck of a big, furry, black dog.  My daddy saw him first in the middle of summer.  The dog had no shade and had turned over his water dish.  It was clear he was suffering. Dad took the bowl, got water at his friends’ house and brought it back to the dog.  Then, he walked up to the door of the trailer and knocked.

“I’ll take that dog off your hands,” he said to the man.

Every day for several days, my daddy did the same thing.  The man said no each time.

It was an incredibly hot day.  The dog had dug a hole in the ground to try to get cool.  This time, the water dish wasn’t turned over.  Instead, the dog had kicked dirt in it, making a slurry of mud.

My dad didn’t bother with the water dish.  He knew the dog was about to die in the heat.

He knocked on the door.  The man appeared.

In a poor part of Kentucky where dogs are a dime a dozen, the offer was too good to refuse.

My dad pulled that furry, black dog out of the hole and took the chain off his neck.  He brought him home and gave him clean, cool water and deep shade.

A few years later my dad had a bad car accident that kept him in the hospital for a long time.  When he finally came home, my mom said the only thing that got him up and moving was that he thought the dog needed exercise.

At the end of one of my trips home, Dad and I said our good byes outside.  I got in my car and started it up, but couldn’t leave.  My dad and Blackie turned to walk through the orchard.  I watched them as they slowly made their way across the grass, covered by the thick shade of the fruit trees. My dad’s broad shoulders were stooped and his steps were slow. Being off leash, that dog could have run ahead to chase rabbits, but he matched his steps to my dad’s. Every few feet I could tell daddy spoke to the dog, because he turned his head and looked up at his master. The place he took at his redeemer’s side showed devotion, loyalty and obedience.  The two of them made a beautiful picture of merciful love and gratitude, etched forever in my mind.

It’s the way I want to be with my Redeemer, Jesus Christ, who paid a price beyond compare for me.  He pulled me out of the pit where I was choking on a slurry of sin and brought me from death into life. He un-wrapped the chain tangled around me and offered living water and a new beginning.

All too often, though, I run ahead of my Master, chasing after distractions that cross in front of me.

I want to keep that picture of my daddy and his big, black dog in the forefront of my mind, to remind me to match steps with my Savior and to listen for His voice.

Where are you?  Running ahead or zig-zagging around, enticed by life’s distractions?  Come back to your Master’s side. Seek His face and will for your life.  Follow His path.

Or, perhaps, you are in the pit of despair, sweltering under the oppression of sin. There is One, named Jesus Christ, with a heart of mercy, who wants to unwrap the chains and bring you home.  He has already paid the price to set you free.  Drink the water of life He wants to give you!

God’s compassion is beyond measure.  If you know Him, share His compassion with those whose paths you cross.  Share the truth of the gospel of Jesus Christ that will set them free.  Tell them there is shelter in the shade of the Almighty’s wings.

“He lifted me out of a slimy pit, out of the mud and mire, He set my feet on a rock and gave me a firm place to stand.  He put a new song in my mouth, a hymm of praise to our God.  Many will see and fear and put their trust in the Lord.”

“I tell you the truth, whoever hears my word and believes Him who sent me has eternal life and will not be condemned.  He has crossed over from death to life.”

“So, if the Son sets you free, you will be free indeed.”

“He who dwells in the shelter of the Most High will rest in the shadow of the Almighty.  I will say of the Lord, He is my refuge and my fortress, my God, in whom I trust.”

Thank you for your encouragement, Vicky. You are right.  The most important thing is to share the Word. A gift left in the box brings Him no glory.   Every word, every thought is from Him and for Him!

Join 84 other subscribers
Follow Live Your Mission on WordPress.com