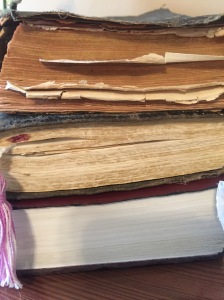 The yellowed pages have fallen away from the binding and some of the edges have crumbled away.  The cover is tattered and worn, frayed by hands and time. The state of that Bible defines the faith of the woman who used it.

Her faith became more real as the  pages became more fragile.   It was the first of three Bibles, the one she owned as a school girl and read throughout many of the tragedies of life in a fallen world.

The words on those yellowed pages spoke to her at age 17, when she lost her father, and years later, as she wept through the unbearable pain of losing her first baby, just hours  old.

The truth of a Sovereign God who is always in control brought comfort to a heart that sank with worry over the bombing of Pearl Harbor; and again, as she grappled with fear when her husband received his draft notice.

The promises contained within those tattered pages may have been difficult to grasp when she heard that her second little girl had leukemia, and harder still to cling to, as she watched death take that child away.  Her grief multiplied as she saw the heart of the man she loved torn in two by the loss.

It is likely that her tears left stains on the pages as she grieved over the miscarriage of yet another precious life.  Her questioning heart cried out to God in desperation, and her words, written and captured for time, told of the darkness that nearly eclipsed her faith, clawing at a heart that loved and lost three children.

The words on the pages of that old Bible, active and living, coursed with the life of the One who spoke all wisdom and promised never to forsake her.  Faith, tested and tried, became real with the knowledge that her faith was not strong, but that the One on whom her faith rested, was.  This was proven yet again, in her later years,  as she cared for her husband as his mind, and then his life, drifted away, stolen by Alzheimer’s.

When he died, grief took its toll, and for once in her life, she actually looked her age. But the Faithful One re-gifted her with a youthful outlook and  renewed her strength. He gave her peace and new purpose.  She learned to play the piano at age 89, wrote songs, began teaching  aerobics (stopping at 93 only because she outlasted the ladies in her class), traveled and led devotions at her church and women’s clubs every chance the Lord provided.  She was asked to sing the song she wrote for her beloved Jesus, “I AM NOT ALONE” at nearly every gathering she came to.  The Lord allowed her to stretch her wings and touch many lives. She thanked Him every day.

One final test loomed in her life when cancer was diagnosed.  Though afraid at first, her trust in God was unbroken.

“Sifting complete,” God must have said in response to her trust.  In His wisdom, He took my mother home quickly, two months before her 94th birthday, before cancer could claim her painfully and slowly.

My sister and  I scattered her ashes on Easter Sunday, at sunrise, one year ago. The air was crisp and the sky was golden with new light.  I repeated the Savior’s words:

My mother believed in the empty tomb and the Savior who overcame sin, death and separation.  She believed in Him through the storms and tears.  She clung to Him, trusted Him and held onto His words.  She lives with Him, in eternity, because she was His child, adopted into God’s family through the life blood of His Son.

The spiritual legacy my mom left behind is poignantly symbolized by her oldest Bible, which shows the wear and tear of a sifted, yet joyful, life.

The truth still shines from the pages of that Bible, and the long-lived hands which cradled it turned the pages of two more Bibles; leaving behind a note in the last one, referencing two verses that captured her heart:

Thank you, Lord, for my mother.  I know she is with you. I am convinced I will see her again.

Join 84 other subscribers
Follow Live Your Mission on WordPress.com