Homeschooling is a complex mix of challenge and blessing.  Of all the things I’ve done, it has required the most faith and courage.  I would not, however, choose another course, even though the climb upward often leaves me feeling unbalanced and shaky.

Because of that, I give home-schooling  over to the Lord, again and again.   He blesses me and shows up in ways I never expect.

Many of us do.  She’s persevered  and made good progress, but in April 2016, we reached critical mass.

The unit we were working on was beyond hard for her.  Repeated attempts, discouragement, failure, frustration and  anxiety swirled around her like tatters of dismal fog.  “I’m a failure,” she said.

“No, no, no you are not.  Math doesn’t define who you are.  In the whole scheme of things, it really doesn’t matter!”  My words spilled out, futile attempts to change her mindset.  I prayed.  “Help her, Lord.  Help me to help her, not so much IN math, but in how Math makes her feel.”

“Let’s walk away from it for awhile,”  I said.  One of the beauties of home-schooling is you can do that.

The day was warm and sunny. I suggested something I thought might be a way to switch gears. “Let’s go for a hike.  We’ll have some kind of a  lesson outside.”

My girls both know I love to teach through experiences, on the go and in the moment.  Life IS school, I have been known to say.  That way of teaching is always met with groans and rolled eyes, because it brings school into times of the day or activities which the girls think should be un-touched by lessons.

They both knew it was unlikely I could keep a lesson out of the hike, but  the promise of an afternoon away from the books softened the blow.

Boots on, Morgan, Olivia and I journeyed out.  As we entered the woods across from our house, an idea emerged. I could teach them about the impact of natural and human forces on our world.  Brilliant!

As we entered the woods, I embarked on a lesson about erosion and other forces which naturally change the environment, pointing out examples of that very thing as we traveled along the banks of a stream.  I segued into a  discourse on the Leave No Trace Philosophy, an outdoor code of ethics which began in 1960’s.

We, as responsible people, I elaborated, should live by these rules when  we enter a natural environment, showing care and respect for our surroundings.

I emphasized the core philosophy: Leave no footprints, take only memories, make no changes.  Overall, limit the impact  on the environment.

I still had more to add, but, my girls are quick studies on things like that, so, okay.  Lesson done.

We followed the stream through the woods, as best we could.  The area was surprisingly hilly, making the hike more fun than just an easy stroll around the soybean field.

The stream widened into an inviting section where clear water skirted a sandbar and tumbled over pebbles.  The girls clambered down a short embankment and stepped into the clear water.

“Hurry, mom.  Follow us!” they called as they splashed downstream. 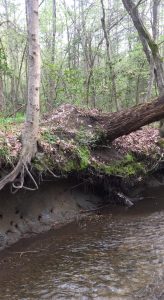 The stream bed was not far from the top of the bank where I stood.  Feeling invigorated by our adventure, I jumped down.

Instead of sticking the landing, I lost my balance on the squishy sand bar, twisting my knee in the process.  A sickening pain shot through me and I dropped like a lead weight.  Lying on my back in the shallow water, I felt an intense and familiar pain.  Having torn my right ACL years before, I had a shocking and immediate sense of deja-vu.

I feared my left ACL was now history.

The girls ran back upstream.

“Mom, Mom, are you okay? What happened?”

I bent my  head down between my knees and forced myself to breathe deep.

Deep breath.  “Just be calm. Help me up out of the water and onto the bank.  Then we’ll figure it out. ”

Both girls helped me get back onto the bank.

The pain was almost unbearable.  I stood there, not wanting to believe what just happened, angry at myself for not being more careful, frustrated because this meant no more running, probably for a long time, possible surgery, recovery…and how in the world would I get home? Hundreds of thoughts shot through my brain, each one demanding attention.

“Let’s pray about this,” I said.  We held hands and prayed that God would help us.

He did.  Short prayer.  Immediate calm.

The plan became clear in my head.

Olivia, my tween, was already looking around.  Always practical.  She drug over a stout branch.  Morgan stomped it with her boot until it snapped.  She handed me the newly made walking stick.  With its help, I was able to walk slowly, though painfully.   One of my girls walked beside me, while the other walked ahead, picking the smoothest path.

They took turns helping me or clearing the way, throwing aside broken limbs and debris, so that I wouldn’t have to step over or move around things.

“So much for your lesson on Leave No Trace, Mom,” Olivia said as she snapped a dangling branch that I would have had to sidestep.

“Yeah, mom, that’s not working out so much, is it?”  Morgan added as she kicked and rolled a fallen limb out of my path.  Both my girls have always  pushed the edges of accepted rules and restrictions. They’re free spirits.

As we continued,  ‘Leave No Trace’ became a joke which the girls made more than once.  Years of backpacking with that philosophy, down the drain in an instant.  I’m sorry, nature lovers.

Despite the pain,  I had to laugh as my girls milked that failed lesson for all it was worth.

Oh,  the indignity of it all.

It was more than okay, though; the humor changed the focus,  making what could have been fearful for them, funny.  No doubt the prayer we started that homeward journey with helped, too.

My free spirits made my path as easy as they could.  Some of the hills we traveled were too steep for an injured knee. I  slid down on my backside or crawled whenever I needed to.  Parts of the journey were pretty intense,  but at least I was moving forward. The distance we traveled to the wading place took 30 minutes.  The return trip lasted an hour and a half.

Finally, we broke through the woods and stepped out into the open field.  Our house was in view.  I hugged them both.

I couldn’t have done that, without you, I told them.

Olivia continued to walk ahead, but I stopped Morgan in her tracks. A light  had just gone off in my brain.

God heard my prayer earlier this morning and had given me a way to help my sweet girl in a powerful way that I would never have chosen.

“You said this morning you felt like a  failure after that math lesson.  In the things that really matter,  Morgan, you’re not a failure.  I needed your help, and you helped me.  That’s real life, that’s what matters.”

A big smile lit her face.” Thanks, Mom,” she said, as she hugged me.

I saw the purpose of the injury.  I’ll take the hit, without question, and with gratitude, because as that little drama played out,  a big picture lesson unfolded.

I could never have  manufactured that life lesson for Morgan, but God, in His wisdom, did.  Words without the  experience would not have had the same impact.

God revealed many lessons that day, to both my girls.

…and Leave No Trace doesn’t apply in every situation.

What traces are you leaving behind?  It is unlikely that you will leave NO trace, because every choice made, no matter how personal it seems, has the potential to impact others for good or harm.

Are you leaving a trail of destruction?  It’s not too late to choose a different path.  Jesus is all about moving forward instead of looking behind.  He’s already paid for the sin-debris that litters your path.  He wants to love you, teach you and walk with you as you learn to walk in His light.

Jesus said, “I am the Light of the World.” That means He is the One who conquered the darkness of sin and death.  Accepting His work on the cross for payment of your sin brings spiritual light and life to your soul and a promise of eternity.

Jesus also said, “Whoever follows me will  not walk in darkness, but will have the light of life.” That light is found in His Word, the Bible.  That light reveals the wisdom and truth we need to walk a clear path in THIS life and leave behind traces of Jesus so that others can see the right way and want to follow Him, too.

Choose to walk in the light of the Lord, reflecting  His light so that others see the way to Him.

Ask Jesus to come into your life, search your heart and show you how to walk in the light.  LEAVE TRACES for Him!

“When Jesus spoke again to the people, He said  I am the Light of the world. Whoever follows me will never walk in darkness, but will have the light of life.”

“I have come into the world as a light, so that no one who believes in me should stay in darkness.”

“Your word is a lamp to my feet and a light for my path.”

6 thoughts on “Leave No Trace”

Join 84 other followers
Follow Live Your Mission on WordPress.com